Skip to Content
Home / About Carrie / Carrie’s Path to Publication 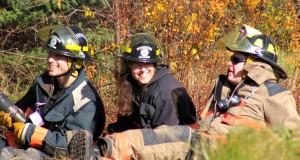 how did carrie get published?

It begins as all good things do with an email announcing the creation of Flux, an imprint of Llewellyn. Flux was accepting YA novels. Hhm? I thought to myself. I just wrote a YA novel. Sure, I hadn’t shown it to my advisor at Vermont College’s MFA in Writing Program. Sure, I hadn’t let ANYONE read it. Sure, I only just wrote it in the last month and it was rough, rough, rough. But I sent it in. I chugged out a cover letter. I found some stamps. I mailed it.

Here is what followed, taken from my livejournal entries.

Sweet Editor Man called me within a week of me mailing the manuscript. Seriously. It was wild.

Okay. Here’s the big question of the day: Why am I so stupid?

I will work on the self esteem exercises tomorrow… but today! Today! Today I am allowed to realize the full extent of my idiotness.

I sent out some manuscript queries on Thursday.

I get a phone call this morning, from a real live editor who says, “Um, is this C.C. Jones?”

“Yes,” I say while pouring out cat food.

He then proceeds to tell me he got my query, wants to see more of my manuscript, but his email requesting it bounced back.

I then apologize and berate myself for not even being able to spell my own last name! What an idiot. He gives me an email address. I send him the rest of the manuscript.

Yeah, that baby’s going somewhere. Not.

Although, he was kind and he did say, “It’s the manuscript I care about, not your inability to spell your own name.”

What a nice man. Even when he rejects the manuscript. He’s still a darn nice guy.

So, despite the fact that I can’t spell, the nice editor man called me back yesterday and talked to me for 40 minutes and told me all the good stuff about my book and what he thinks could get better. It was like talking to a Vermont College mentor. It was really cool. He was brilliant and really, really nice.

And he’s starting the book through the acquisitions process at his imprint, which is really cool… But, I’m not getting my hopes up about it, until papers are signed.

Still, he had the best insight on the piece and I am so excited about working on it. So, that’s what I’m going to do. I’m going to go work on it. He only wants another 10,000 words. Geesh. Piece of cake. Ha.

Well, here’s a quick update on the sweet editor man. He sent me an email, which I can not quote verbatim, because it’s somehow infringing on copyright. HOWEVER, he said that he wanted to let me know what’s going on, that the piece is heading to the acquisitions committee on Thursday and he’ll call me when they’re done.

That is so sweet of him.

But now I’m going to be a nervous wreck until Friday and I’m already hyper and neurotic enough as it is. I think everyone in my family will soon disown me.

On a positive note, I wrote 15,000 more words on it this week and I’m really happy with it. It’s done the Sarah A. rubbing thing, where the characters work off each other. I’ve put more setting in, which is good because I’m weak with setting. I’ve also changed the ending and added a couple of conflict scenes. Oh, and sweet editor man said he hopes I’d have a great weekend. Is he crazy? As I told Emily Wing Smith, no matter what happens I’ve made the piece better already, so I can’t complain when he dumps my butt. So, yeah… Now, back to revising my critical thesis.

He talked to the acquisitions committee today and wanted to call me about it before he battled the snowstorm and drove home. He said they were all “very enthusiastic about it.” They liked the writing, especially the details and he said even the people who don’t like YA were hooked.

So, he’s calling me in the morning to give me contract details, etc… which is great except I know absolutely nothing about contracts because I never thought I’d get offered one. Oh, the stupidity of me continues….

Well, today was a happy fine day because today the JOHN WAYNE LETTERS (title soon to be changed I am sure) passed an acquisitions committee and is now officially wanted with an offer on the table.

What karma gods did I appease? Was it when I helped the little old lady at the grocery store heft her 20-lb bag of kitty litter on to the checkout thing? Was it when I agreed to help run the middle school civil rights team or the drama club?

Was it simply when I refused to succumb to road rage when the guy in the Subaru refused to yield and almost t-boned me? Instead of succumbing to road rage, I thought, ‘Oh, perhaps I’ll get a new car out of this. I hope there’s no major injuries involved.’

I don’t know why. I’m just happy. That’s two YA books now. Now I need to find someone who’ll like my middle grade.

AND my birthday was good despite the fact that I am now old, old, old because I am the same age my mother was when she had me. That is just horrifying. Sigh.

I am not an officially published author yet, because no contracts have been signed but I AM SO CLOSE!